Learn More About Us Today!

1913 – The Rotary Club of Reading was chartered on December 1, 1913. William Keck, Club President, convened the first meeting at the Mineral Springs Hotel.

The 1920s – This period of time saw a Reading Baseball Committee promote better baseball in Reading and we also had a Dancing Club. Programs included “Boyhood Recollections of the Civil War”. Rev. C. E. Roth spoke on the soothing qualities of tobacco. We were also visited by the Governor of Pennsylvania, Gifford Pinchot.

1930’s – Lowell Thomas was the speaker at the January 1934 meeting. We also heard from columnist Drew Pearson, the Superintendent of the Pennsylvania State Police, and cartoonist Ed Carter. We were also treated to two piano programs and a United Airlines program. Flash Gordon creator, Alex Raymond and1939 National Open Golf Champion Byron Nelson were club guests as well.

1940’s – In November 1945 the club saw an actual demonstration of television at its weekly meeting and in September 1949 Phillip Lovejoy, President of Rotary International was the speaker. Other programs included the Penn State Glee Club, the National Commander of the American Legion, Lil’ Abner creator Al Capp, Postmaster General James A. Farley, James Cash Penney, Gracie Fields -“world’s greatest comic”, the manager of the Reading “Brooks” baseball team as well as the chaplain at Sing Sing Prison – who spoke on “Famous Criminals I Have Known.”

1950’s – The September 1953 Fortieth Anniversary Celebration was held with 378 people in attendance. During this period the activities of the Reading Rotary Club were directed into two main channels, education and better international understanding. As a prelude to its efforts in the international field, a group of 16 persons from the Reading area, Rotarians and their wives, traveled as a body in the year 1953 to Reading, England, to be guests thereof that city during Coronation Week. In the spring of 1957, the Reading Club sponsored a dinner meeting in Lucerne, Switzerland. During the International Convention there, attended by about 35 Rotarians from the Berks County area and in the same year, it instituted Rotary meetings on the Holland-America liner “Statendam” on her maiden voyage eastward from New York, through the presentation of a lectern and a gavel. This was followed by a “goodwill” letter to every Rotary club in the Netherlands. Speakers included Theodore Roosevelt III, Tris Speaker, and an Air Force General.

1960’s – “THE GOLDEN AGE OF READING ROTARY”
The December 1963 Golden Anniversary Banquet was held with Charles W. Pettengill, Rotary President-Elect as a speaker, and James F. Conway, Rotary International Second Vice President in attendance along with 350 guests, including numerous former District Governors. Joe Abey later became Rotary International President and Reading’s Mayor was our own Gene Shirk. This was the Age of Aquarius, Bobby Vinton, The Twist, The Rolling Stones, and The Beatles. Skateboards and GI Joe Dolls dotted the scene. Pampers covered our babies and our youth wore bell-bottoms and bouffant hair was all the rage. JFK gave us all hope for “A New Frontier” which was tragically shot down on that fateful day in Dallas. Star Trek was born, but Viet Nam nearly tore two countries apart. In 1969 we fulfilled President Kennedy’s dream when we walked on the moon.

1970’s – The Me Decade featured platform shoes, mood rings, and Happy Face buttons. We read and watched The Godfather, Jaws, and Roots. TV brought us All in the Family and we cheered as a washed-up Philly fighter named Balboa destroyed Apollo Creed. CB radios boomed and gas lines formed on even or odd-numbered days. Reading saw the birth of BCTV. Our programs featured the British Consul General and we had programs on the charter study commission.

1980’s – The 1980s saw Reading Rotary hosting exchange students and sending others abroad. We supported a Reading High school student at the Presidential Workshop in Washington, D.C. The eighties were a time for optimism. The hostages were released and the economy blossomed. We played with Rubik’s Cubes and got a tan in a booth. Smurfs, Cabbage Patch Dolls, and Nintendo all made it to lists for Santa. Break Dancing made a huge breakthrough. CNN was born and the Iron Curtain began to tear.

1990’s – We enjoyed programs on pretzel-making and chocolates. We visited MetEd and the Reading Phillies. This time saw the Big Phillies in the World Series, Desert Storm, and the fall of THE WALL. Barney bopped onto the scene and we listened to Rush. Team Penske dominated the Indy 500. The Reading Phillies won the title also. Reading Rotary stopped its nomadic existence and settled on the YMCA as a permanent home. Music returned to the club. We presented 40 Paul Harris Fellowships and Rotary Park was completed.

Rotary club membership represents a cross-section of the community’s business and professional men and women. The world’s Rotary clubs meet weekly and are nonpolitical, nonreligious, and open to all cultures, races, and creeds. 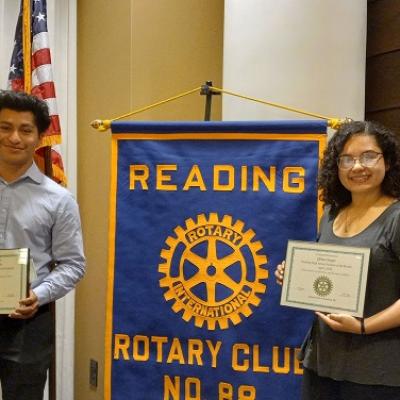 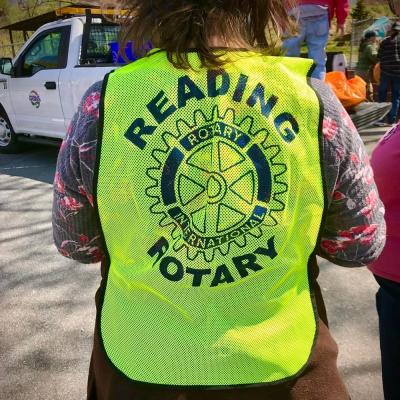 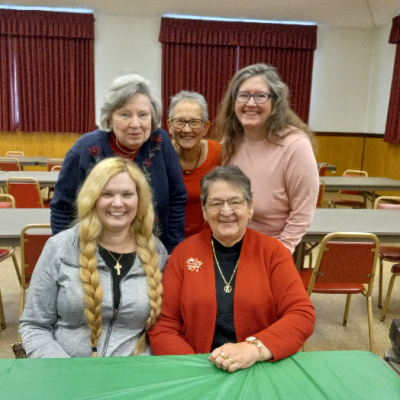 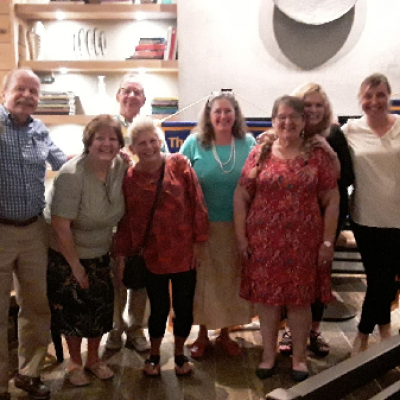 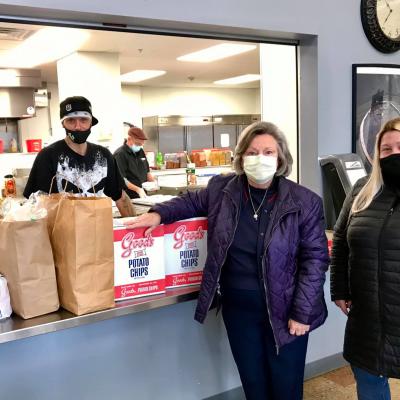 Lunch for the Hope Mission 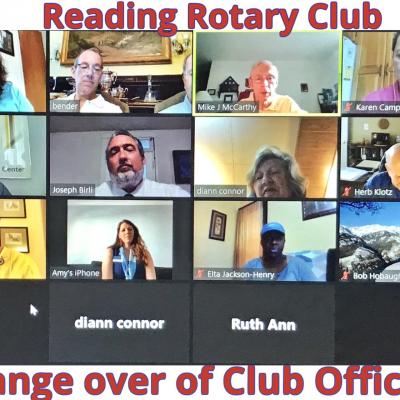